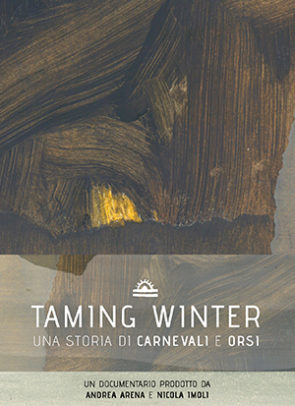 Winter has come. It is a moment of great crisis. Nature died, following the bear in its den, in the womb of the earth. Will spring come back? Will the seed sprout, while hidden under the blanket of snow? Will life triumph this year, once again?

European winter is full of carnivals. But if you leave the cities and go through the remotest valleys, in the small villages clung to the slope of the mountains, you can find celebrations that differ from the Carnival we all know. Each ritual has its own specificity, its peculiar masked characters, and it is lived differently in every single place. But there is something recurring in every winter ritual documented in Taming Winter. We always find similar costumes, with animal skins and loud livestock bells. We always find the same theme, the killing of one of the characters, the hunt, that brings us far away, from European villages to Siberian forests.

What is the thread linking Siberian hunt festivals and European winter masked rituals? Which symbologies hide behind these widespread circumboreal celebrations, whose origins are rooted in a deep and shared past, deeper than the one that performers themselves often recognize?
Taming Winter is a story that documents different carnivals, retracing the historical development of the character subjacent to these rituals, who was during the centuries successively divinized and demonized: the bear.

The documentary follows the thread linking European winter masked rituals with the bear. Visiting various carnivals, from Sardinia to Tyrol and from the Basque country to Piedmont, it accompanies the viewer through three acts: the closeness that various peoples all over Eurasia felt with this animal and the divine status they attributed to it; the winter, the seasonal “death” of the bear in hibernation under the earth, its demonization and the prohibitions of its rituals by the Catholic Church; its rebirth in springtime that, just like the rituals, brings back life and fertility once again.