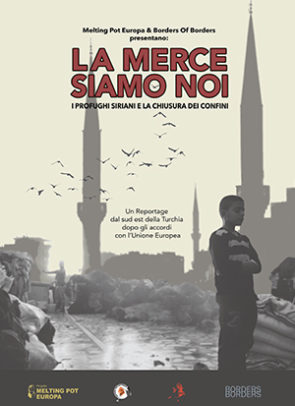 #Overthefortress is a social and political campaign, a collective action of monitoring and investigation in and beyond Europe Fortress. It began as a relay in August 2015 along the “Balkan route”, and following the changes in the European migration control and blocking policies, keeps a close watch on the main migratory routes and on the internal and external borders of the European area.

It is with this rich path behind us that we have decided to move further, where the agreements that we implicitly sign as Europeans arrive, but of which we have no clear news on the effects, all too often inhumane and unacceptable. Gaziantep, Kilis, Antakya; along the way you often see it in the distance.

A wall that runs along the border, sometimes you can even see huge cranes that lift those concrete blocks that make up the wall. It is only one of the most visible consequences of the treaty between the European Union and Turkey. As do the dozens of kids on a lunch break that crowd the streets of the textile workshop district, near Antep. They too are a consequence of that treaty.

THE GOODS WE ARE, produced by Melting Pot Europa, in collaboration with Borders of Borders and Pettirouge.Prod is a project of the campaign #overthefortress.

Through the stories of some Syrian refugees, blocked for years in the territories Turks close to the border, we investigated the consequences agreements between the European Community and Turkey. Work, education, home, rights, duties, inequalities, hopes, disappointments. “La Merce Siamo Noi” is a road movie that runs along the drawn lines from refugee camps in southeastern Turkey, a labyrinth of walls and restrictive measures, unprecedented political manipulation and exodus.

We met some of those thousands of escaped children since the war in Syria, we met them among mountains of fabrics, in huge decadent warehouses, unknowing protagonists of the boom economic sector in the Turkish textile sector. And day after day, kilometer after kilometer, face after face, story after story, what was outlined was a story where nobody he is guilty, because beyond wars, religions, revolutions and ideologies, beyond all this, and before all this we are the goods.