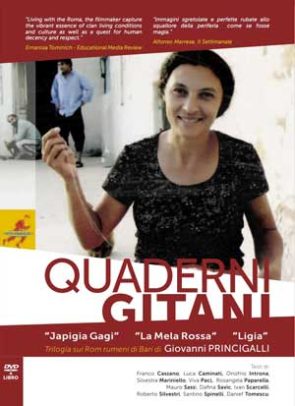 Giovanni Princigalli’s debut film, society of visual anthropology’s award winning, is a documentary that took more than a year making. In this year the director lived in an illegal shack near Japigia district in Bari: weddings, dreams, clashes, resistances, rights, life and end of a community living at the edge of a periphery.
2- La Mela Rossa (The red apple) (2014, 20’)

A docufiction which won an award at Dignes-les-Bains during the rencontres cinématographiques. The movie tells one first day of school, one first love and the discovery of racism. Two Romani kids ad-lib while interpreting themselves, reinventing their routine, between shacks, the motorway and the buildings of the periphery. The beach is their shelter, where they go to beg but even to play near the sea.
3- Ligia (2014, 21’)

A portrait of Ligia, wife of the community’s spokesperson, who tells about her daughter, who is in jail, about the life in the fields and of the dream of having an house, after 15 years spent in a shack.